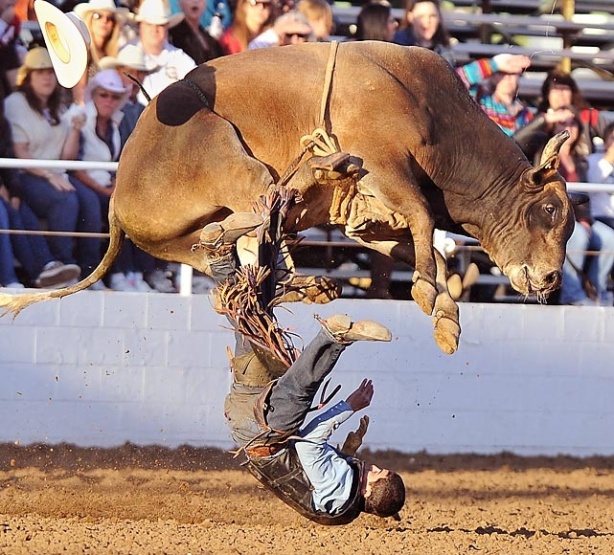 “Bullfight critics row on row, crowd the vast arena full. But only one man’s there who knows. And he’s the man who fights the bull.” – Anon E. Moss

It is one of those days; those days where the storm clouds are all menacing and dark, when the sun has all but extinguished its rays and the air feels charged with static electricity. Those days when the waiting feels ominous and a sense of foreboding surrounds you. Those days when even an umbrella would probably want to take the day off, with defeat waiting to be embraced. It is the calm before the storm but this calm in itself has taken on another definition. This is one of those times when the very thought of just stepping outside the comfort of your home tilts between being adventurous and being insane; and for many, their lives are just an unending series of unexplainable catastrophic events, of harsh storms; winds howling and shrieking, trashing anything she can lay her fingers on. Yes, it is one of the those days.

I have bull-riding on my to-do list along with deep scuba diving, hand-gliding, car racing…..yes they are still on my list because before dystonia, there was the list. Now, I know that for professional bull riders in America, the rider must stay on top of the bucking and obviously enraged bull (hell bent on unseating you and possibly goring you to death), cling to the bull rope with one hand for eight seconds and not touch the bull with your free hand. Now that in itself is no mean feat because those 8 seconds can sometimes seem like an eternity when you are on the bull’s back, but in addition there are conditions to be met and these conditions are what the judges use to evaluate each performance. The bull rope is not something specially made, it is simply a flat braided fiber rope that is wrapped around the chest of the bull directly behind the front legs of the bull. To this fiber rope, the rider must hold on and stay seated for 8 seconds, if for obvious reasons the rider cannot remain seated on that bucking bull for the 8 seconds duration then the judges declare it ‘no score’. Not 7.5 seconds, 8 seconds! Despite it being called ‘ the most dangerous eight seconds in sports’ I still have it on my list because the list on its own is a statement of defiance and declaration that buck all you can, I am going to ride this storm till the end

However, like the wild enraged bull, life can present events that can and will buck you, attempt to unseat you and generally just be the worst thing that could ever happen to you. The question then is how do you manage the bucking bull that more often than not, you are compelled to ride at some point in your life. The difference between the success of your performance as a bull rider is to a great extent determined by the mindset with which you go into the pen. While many are still processing the fact that they are no more spectators, the pen is opened and the ride begins, and I can bet you that many never make it beyond the pen. The successful bull rider prepares himself for just that 8 seconds, knowing very well that it might be the beginning of greater things or the end of a season. Just 8 seconds, but with lots of preparation and a mindset that has so finely tuned itself to time that even if the horn signalling the completion of the ride fails to sound, the rider knows enough to make a dismount and give way to the next rider; either as an inspiration or as example of what not to do.

Being an avid watcher of bull riders, I have watched people tossed many feet into the air and come crashing down to the hard packed earth, I have seen some stomped on by the bull and even with all the distractions and the attempts of the rodeo clowns or bull fighters, occasionally the bull satisfies itself by doing a victory lap around the arena with the unfortunate rider impaled on its horns. A gory death indeed but we are not here to talk about death, gory or not, because death in itself is an inevitability for everyone. Alas, like every other thing; death marks the end of a season and the beginning of another. Back when I was younger, I always stated that it was better to leave this earth in a blaze – with so much fanfare that it would leave a searing impression on the minds of those that were opportuned to witness it. Now I know better, because it is not the moment that is seared in memories but how you lived till that moment of transition.

Dystonia in so many ways, is akin to riding a bull. It just doesn’t stop at dystonia or Parkinson’s Disease, it applies to every storm that you encounter in your life’s journey. And whilst you may find yourself prepared or unprepared, there is that window of opportunity to quickly come to terms with the situation you are in and grab a hold of that rope because that flat braided fiber rope is all you can cling to once the pen is opened. I have since come to terms with the fact that life does throw you curve balls at times but being able to respond and grasp the reality is what keeps you from being just another wounded rider. Am I going to allow myself be the jewel adorning the curved horn of an enraged bull as it trots around the arena or will I hold on until the 8 seconds is up, successfully dismount and give the next rider something to shoot for? Like we all know 8 seconds is not really that much of a time frame but while you are seated on top of that bull, it will seem like eternity. Regardless of how loud the applause is from the spectators, you have to embrace the fact that it is down to just two players – you and the bull.

As the critics holler their disdain for your ride or critic unfairly the style you use, remember that they are safely seated behind a huge barricade and rarely will they do more than just critic. However, amidst the spectators and other players, there are a few who are there to ensure you get done with the ride and dismount without severely injuring yourself. The rodeo clowns will do their bit when the time comes but you have to take charge and remember it’s just 8 seconds. For as long as life exists, we need to apply the right knowledge to situations as they come up. Bull riding is not the time to grab the bull by the horns, it is the time to hold onto that lifeline that you have so graciously been given. The fiber rope could be past experiences, it could be lessons learned, it could the kindly offered advise many years ago, it could be the out-stretched hand of a stranger but you have to recognise it for what it is or lose your seat even before the pen is opened.

And so remember this honest prayer as you press on

“Dear Lord, I have this feeling in my heart
when I slide down on my bull to do my part

It showed me pain
respect and all that is right

Lord, forgive me for taking my life into my own hands
Cos being a bull rider has been my life’s plan

So please God, don’t let this bull take my life from me;
in happiness and humility, a winner I will ride to be, Amen!”

Remember that smouldering ashes can either mark the end of something that was once great or it can be the birthplace of the phoenix, the choice is yours to make.