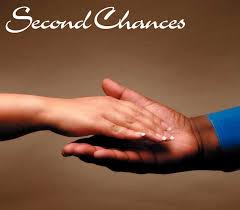 “A lifetime isn’t forever, so take the first chance, don’t wait for the second one! Because sometimes, there aren’t second chances! And if it turns out to be a mistake? So what! This is life! A whole bunch of mistakes! But if you never get a second chance at something you didn’t take a first chance at? That’s true failure.” – C. Joybell C.

I am feeling slightly whimsical as I share this amazing second chance that I am getting because it seems to me more and more each day that to many of us, life is a game of numbers and whilst there might some deep seated conviction in that school of thought, I dare to remind us of the age long story of the seven blind men of Mumbai who after years of walking in blindness from birth were so fascinated by the different tales of the magnificent beast called the elephant. And so the story goes, that they were given their first chance of meeting this creature and like most blind men, their senses of comprehension were to a great extent determined by their sense of feel. The end result was quite compelling because depending on the anatomy of the elephant that they felt, their description was inextricably defined by what they felt. To one, it was a rope; to another it was a wall and yet to another it was a snake, a tree trunk and so on and on. Now I dare to surmise that our own comprehension of life is largely defined by our experiences and so dare to take on new opportunities at defining life for yourself and whilst you may not be entirely wrong, realize that nobody but the Creator has the full picture.

It is the wee hours of another day and I am as usual unable to sleep, tossed down my levetiracetam and my gabapentin and my clonazepam and still sleep eludes me but then it has never been about the things that you cannot do but those things that you can when you can and so instead of me griping about this bout of insomnia, I choose to spend the time doing something I love. I have moved into a different part of the world borne on the tails of medical research, the search for a solution to this neurological disorder and divine purpose and it is actually more like a breath of revitalizing wind because I can now say that what I had in the past compares in no way to what I have now. I was blown away by the unfeigned interest by the consultants at one of the world’s renowned Institute for Rehabilitation and Research and despite the rigorous examination conducted, I had the overwhelming sense of being in the right place at the right time. In the words of my PCP, this is going to be a long and expensive battle but again what victory can best be described as sweetened except one that has been hard fought, for indeed the spoils of victory are best appreciated when the bones are screaming from the fatigue of engagement….so bring it on! “I’m okay today. I’ll be okay tomorrow. And the next day after that I’ll still be okay. But in a year you will see me, I’ll be amazing.“

I am inundated on all sides by the feeble attempts of those who stand close, trying to bring me down but life’s best lessons are learnt in the valleys of adversity for therein you can but learn and truly learn what it means to encourage yourself in The One who defines you. I have met a couple of new people that I already know are going to be an inextricable part of my story and that is what family is about. I have always had etched at the back of my mind that there can exist no vacuum in life and it is a personal choice to set your worries aside and delve deep into the life of one who seemingly seems more burdened than you. For in serving, there really lies leadership. We are surrounded on all sides by individuals who are too scared to be themselves but prefer instead to lurk in the shadows of who they think the world wants them to be and that I know is one battle that you will never win. For in our individuality lies the uniqueness of our paths on earth and these paths must be taken whether they appear as a first chance or a second chance, it is up to you. I just found out that my kid sister is moving into their own apartment and that is a worthy venture and I celebrate with them however truth be told that the golden fleece is usually never where we expected it to be and so the onus is on us to bestir ourselves of lethargy and ascertain our purpose and go after it.

I have been assailed most severely by the intricacies of this journey with Myoclonus and Spino celebral Disease but I made the choice not to be swallowed up by the feelings of isolation and even as the icy flakes and the winds threatened to push me towards wandering around in hopelessness, I made a choice to just stop and look back at where I have come and realize that where I am going is just a matter of getting my bearings right. There has to be for each and every one of us, that point where we consciously cease whatever we are doing and take our bearings in order to get to where we ought to be. Spending vital moments wallowing in resentment and bitterness will definitely take you no further than where you have already found yourself and I say again that it is never too late to begin again. Out with the muddy, sordid experiences of the past because then and only then can the light of God’s leading clearly illuminate our paths and guide us to an end that defies our feeble understanding.

“Some things just couldn’t be protected from storms. Some things simply needed to be broken off…Once old thing were broken off, amazingly beautiful thing could grow in their place.” – Denise Hildreth JonesWe have before us yet another chance to get it right and today is the right time, and just like Steve Martins in the classic movie ‘Leap of Faith’, we just have to trust someone that can be trusted and begin from there because when you are hitched right, you will get to realize that with Him is no variableness or shadow of turning. What He says He will do, He surely will but pause and take a bearing and realize that the chance that awaits you right now, as scary as it may seem is the one that you just have to take and with those few tottering steps, every new day brings in such an infusion of strength that you can only attest that you are better off than wherever you were before. It just has to start with a decision to let go of the past and allow it build up those muscles and resolve that you never knew you had.

“I have become convinced that God thoroughly enjoys fixing and saving things that are broken. That means that no matter how hurt and defeated you feel, no matter how badly you have been damaged, God can repair you. God can give anyone a second chance.” – Melody Carson

Remember that what makes you family is not the blood you share with a few but the loyalty and sense of commitment to our unique paths and purpose with the many others out there who like you have made their commitment to not be put down by whatever life throws at them.