…….A Night With Beverly Trotman 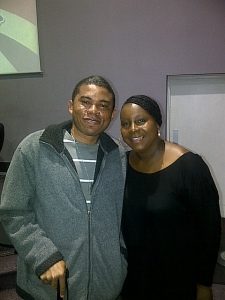 Nothing absolutely prepares you for the delightfully delectable and heavenly notes that emanate from the lips of the once ordinary everyday mother and middle school teacher. Every note, pitch perfect and voluptuous in its delivery and even in her simple all black ensemble singing alongside her eighteen year old daughter from a marriage spanning twenty years, nothing can be taken from her well deserved spot in the limelight. She was once the cynosure of all eyes on the globally acclaimed UK singing/talent show – the X factor and ironically this was right on the heels of a devastating year marked by both the passing on of her granny and a father she never really knew.

Assailed by the tidal waves of life that most often than not confronts every individual at one point or the other, she battled through it all despite not having the succour and warmth of the normal nuclear home – a teen mother she has no memories of (who passed on when she was only 5years old), who gave her away at 10days old to her grandparents where she became the 11th child in an already large, strict but loving Christian home. Striving through the tumultuous identity of being both a niece and a sibling, it was simply a journey that prepared her for the unique persona that she has become. A father who never was; alienated by choice and ravaged by the demons of alcohol and a life based on persistent wrong calls, but through it all she was equipped with something unique and life defining; a knowledge that there is One who administers over the affairs of man and whose love is incomparable but palpable and sure. A life manifesting the joys of salvation acknowledged at the same age of a generation before hers, despite the Christian upbringing – hers was a choice personal and with knowledge but complete surrender to God.

It is true that the choices we make definitely shape who we become and her choices irrespective of the hard knocks only served to bolster her faith and fuel her desires to be who God wanted her to be. As a parent and teacher, she eagerly gave what she had received – an incomprehensible peace, compassion for kids and a faith in He who is. Seeking first the Kingdom of the Sovereign King and its righteousness, she sought to impart the real meaning of life in Christ Jesus in her home and her school. One clear fact stands out in her story, and that is God prepares and processes you for a purpose but yet again it’s yours to choose, hence the clear voice of wisdom still shouting out in the streets “the reverent fear of the Lord is the beginning of wisdom”, seek her and in all thy getting, get understanding for the fear of the Lord is like a fountain of life that keeps us from the snares of death.

From the security of her family and the world of teaching, she was thrust into a world that is easily recognised by today’s society – a stage characterised by glitz and glamour, pressured by the demands of a decadent society that so eagerly clamours for the bizarre. She became a contestant on the X Factor and borne on the wings of grace and a garment of favour and an undeniable manifestation of God’ s excellence, she revealed to the world the potential God had deposited within her. The middle school teacher/ mother/ wife turned singing icon, week after week,  braved the world that so desperately and consistently battles to make you become someone else other than who you truly are and triumphed she did – becoming a finalist on the show. Her unflinching faith and knowledge of God was a critical key in keeping her from being besmirched by the world system.

Riding on the crest of global fame, being tossed to and fro is inevitable except you have an anchor but for her, there was a rock that is higher than high and a foundation that is firm and sure – Christ Jesus. She found succour in God’s grace, and sought to ratify God’s calling upon her life, turning down a pathway to ‘stardom’ and choosing to return back to her family and thus stands today not just as an X-factor finalist but as an accomplished mother, wife and minister of God. An instrument of praise and profound worship for the Lord and in the vocabulary of today’s youth, a ‘sick’ vocalist. Succinctly put, glitz and glamour undeniably ‘enhances’ an individual’s allure depending on the audience you choose but what distinguishes whilst definitely and certainly propping a man up is simply the inexhaustible and profound grace of an awesome God.